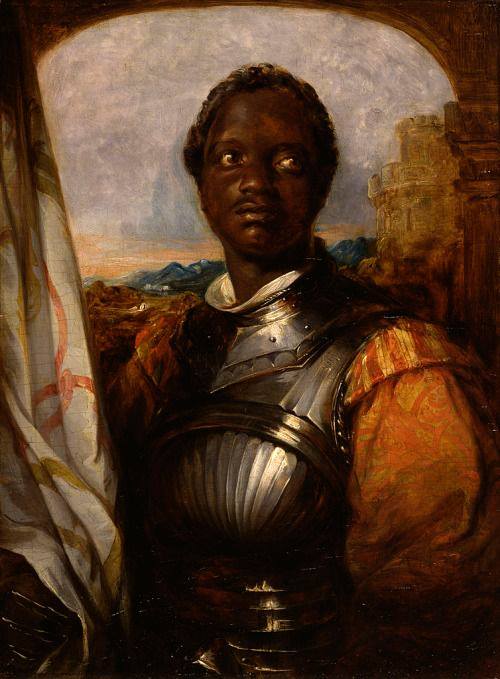 African-American actor Ira Aldridge (1807-1867) painted by William Mulready (Irish, 1786-1863). Praised as one of the greatest tragic actors of his day, he won renown in Europe for his Shakespearean roles, including Lear, Macbeth and, most famously, Othello. On October 10, 1825, Aldridge made his European debut, making him the first African American actor to establish himself professionally in a foreign country (at London's Royal Coburg Theatre). The following year he played Othello. By the time of his death in 1867 he had won awards and medals all over Europe, having played in Berlin, Brussels, Paris, Frankfurt, Cologne, Bonn, Budapest and the major cities of Russia. An innovation Aldridge introduced early in his career was a direct address to the audience on the closing night of his engagement at a given theatre. Especially in the years leading up to the emancipation of slaves in British colonies (by act of 1833) he would speak of the injustice of slavery and the passionate desire for freedom of those held in bondage.

Somebody on seeing this image on our FACEBOOK page exclaimed: "If this is a man why does he have breast. This is a picture of a woman."  I them explained: "Armour of that period (Renaissance) was bulged out on the chest like that to deflect spears and lances, it was found that flat fronted chest armour would penetrate too easily, the curvature giving it more strength and making it more likely that an enemy blade would slide off. The ridges on the armour (fluting) were also intended to give additional strength - a bit like corrugated roofing." Check out our FACEBOOK page for more interesting articles, special offers etc.: https://www.facebook.com/medievalshoppe/