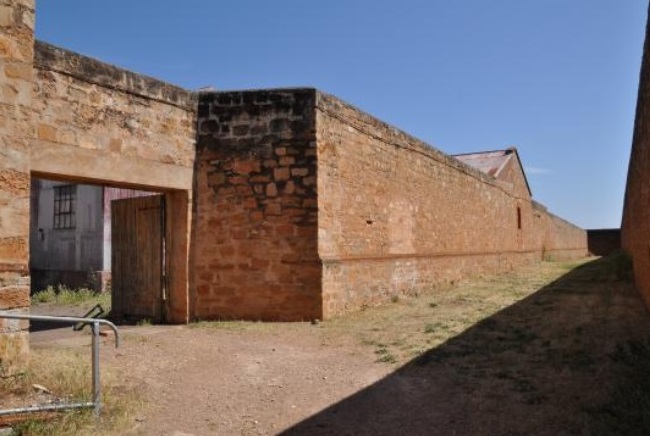 Gladstone, SA. A couple of weeks ago THE MEDIEVAL SHOPPE got back from Gladstone's Gaol's Medieval Fair.(built in the early 1880's and closed as a working prison in 1975.) It was an interesting time, and we actually staid inside the prison for an entire week, waiting to push onto the next medieval fair at Kryal Castle (Victoria) on the following weekend. The staff kindly allowed us to stay there and for several nights we were all alone in the reputedly haunted prison (more about that later). We didn't think the fair went too badly, but it seems to have been decided by the organisers that the next one won't be until 2021 )-: I have seen the Old Dubbo Gaol (NSW) and the historic Trial Bay Gaol (NSW) - but this one is far bigger than those - it's an impressive complex completely built with beautiful irregular stone blocks, although I doubt any of the former inmates found those walls "beautiful" back in the day! It's a great venue for a medieval fair. On one particularly hot day I wasn't looking forward to being back in my room within the prison, as it was without much ventilation and of course it had no AC. To my surprise though, the room was cool - then I thought "yeah, two foot thick stone walls!" One night we were treated to the "Ghost Tour", and we were told stories of horrific murders, innumerable suicides and executions. It was good entertainment, but due to my inclinations as an amateur historian and because of the amount of time I had to kill there, I took the trouble of reading all the information displayed on the walls, of which there's a great deal. Apparently for the first 30 years of the gaol's existence it was hardly used - sometimes having as few as eight inmates, which is quite mind blowing considering the size of the place. During the 20's and 30's there were about 30 inmates there at any one time. It closed in 1939, when it was taken over by the military, who then proceeded to never use it. It reopened in 1953 as a low security prison, for low risk prisoners who were allowed to work in the local community and learn trades during their mild detention. During the history of the gaol, there were no executions and only eight people ever died there, half of those were very old - one of them was a poor woman who wanted to stay in the prison beyond her sentence, as she was sick and had nowhere else to go, the staff tried to nurse her back to health but she died. So, actually Gladstone Gaol was a pretty laid back place by 19th and 20th century Australian penal standards, and nothing like the concentration camp of horror and despair as represented on the Ghost tour! The biggest question for me though, was .... why was it built in the first place? It must have cost the modern equivalent of tens of millions of dollars to build, and yet it was hardly used. My theory is that GLADSTONE was planned as an Australian mega city, and it simply never happened. The 19th century colonial SA government gave Gladstone several massive and most impressive stone buildings, one being a bank, one seemingly the town hall, they then provided the town with a fine and big railway station, this huge prison, and laid out enormously wide streets, as you would find in central Adelaide or Sydney. These streets, like New York are called "First" - "Second" - "Third" etc. ......... it seemed as if they thought they were planting a future metropolis .... 150 years later Gladstone has a population of 630. It's a fine little town though ... hope to see you there in 2021!