The Campbells and their loyalty to the union. 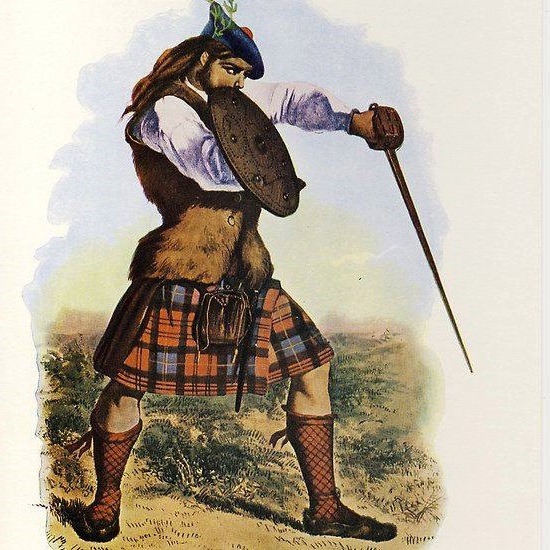 We have a very Hollywoodised view of the Jacobite rebellions, as a war of English vs. Highlanders, but the truth was far more complex. Take the important Campbell clan for example, a major clan who controlled a quarter of the Highlands. In 1692 they invited the clan leaders of the MacDonalds over for a chat, and massacred them on the grounds that they had been too slow to voice their allegiance to the King of England! During the Jacobite risings of the 18th century the Clan Campbell supported the British-Hanoverian Government. On 23 October 1715, chief John Campbell, learned that a detachment of rebels was passing by Castle Campbell, towards Dunfermline. He sent out a body of cavalry which attacked the rebel party and defeated it in what is now known as the Skirmish of Dunfermline and took a number of prisoners, taking only light casualties themselves. A month later the British Government forces, including men from Clan Campbell, fought and defeated the Jacobites at the Battle of Sheriffmuir in 1715. Such loyalty did not go unnoticed, and in 1725 the British government created the Reicudan Dhu, or Black Watch, a predominantly Campbell regiment that wore dark black striped tartan and were created to watch over the Highlands. By 1745 however, this crack fighting force was off fighting in Flanders, and the unwatched Highlands again rose in rebellion. Despite the fact that most of Clan Campbell’s fighting men were off in Europe, they continued their support for the British Government. They fought against the rebel Jacobites at the Battle of Falkirk (1746) where Government forces were defeated. However, shortly afterwards the Campbells held out during the Siege of Fort William where the Jacobites were defeated. The Campbells were also involved in the Skirmish of Keith around the same time. At the battle of Culloden, the Campbell Argyll Militia, played a crucial role, outflanking the Jacobites, cutting off their retreat. Also amongst the British government forces were three companies from Loudon's Highlanders who were under the command of Lieutenant Colonel John Campbell and one company from the 43rd Highlanders who were under the command of Captain Dugald Campbell of Auchrossan. THE BLACK WATCH IN AUSTRALIA - in 1751 the Black Watch was formally titled the 42nd (Highland) Regiment of Foot. The 73rd Regiment of Foot was originally the Second Battalion 42nd (Royal Highland) Regiment of Foot - the 73rd (Scots, who still called themselves the Black Watch) landed in Sydney on 1 January 1810 and took over duties from the New South Wales Corps (102nd. Regiment). It was thus the first of many British line regiments that garrisoned New South Wales for the next sixty years. The Duke of Edinburgh's Highlanders formed in 1868 was a New South Wales regiment, the unit wore a kilt of Black Watch tartan and became known as the Highland Brigade - it was disbanded in 1878.The 42nd Battalion was raised at Enoggera near Brisbane, Queensland, in December 1915 as part of the Australian Imperial Force (AIF) during the First World War. Due to sharing its numerical designation with the famous Scottish regiment, the battalion became known as the "Australian Black Watch".