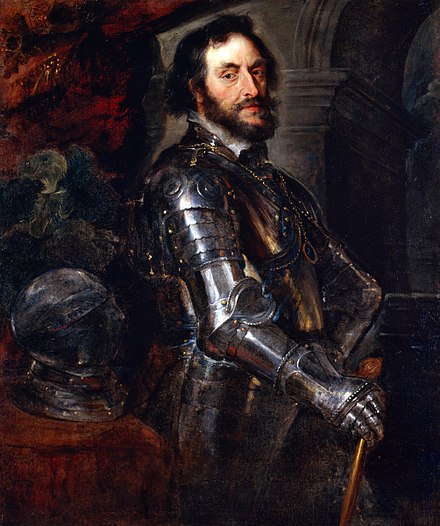 Thomas Howard, 14th Earl of Arundel (7 July 1586 – 4 October 1646). A passionate art collector and a rather inept commander of an abortive English invasion of Scotland. Arundel was born in relative poverty, at Finchingfield in Essex on 7 July 1585. His aristocratic family had fallen into disgrace during the reign of Queen Elizabeth I owing to their involvement with Mary Queen of Scots. Arundel's family got lucky though when Mary's son (James VI of Scotland) attained the throne of England The fallen family's loyalty to his mother was rewarded, and Arundel was restored to his titles and some of his estates in 1604. He then had a busy career as a diplomat, and spent a lot of time in Italy spending huge sums of money on art. He became a member of the New England Plantations Committee in 1620 and helped plan the early colonization of North America. When Charles the 1st attained the throne, he quickly managed to piss him off and was imprisoned in the Tower, but in 1628 he become reconciled to the king and was (rather incredibly) made a privy councillor. In 1638 he was entrusted with the charge of the forts on the border with Scotland, and, supporting alone amongst the peers the war against the Scots, was made general of the king's forces in the First Bishops' War, though "he had nothing martial about him but his presence and looks." If you've never heard of the First Bishops War, it's probably because Thomas Howard was in charge of it. A unified Church of Scotland and England governed by bishops became the first step in the king's vision of a centralised, Unionist state - which most Scots were not interested in. Consequently English governance was easily and quickly overthrown and Scotland once more found itself independent Charles resorted to military force to reassert his authority but couldn't get funding nor support from Parliament, so the King instead relied on his own inadequate resources. Thomas Howard's grand plan consisted of three parts; an English army of 20,000 would advance on Edinburgh from the south, while an amphibious force of 5,000 under the Marquis of Hamilton landed in Aberdeen and linked up with Royalist troops led by the Marquess of Huntly. Lastly, an Irish army under Randal MacDonnell, Earl of Antrim would invade western Scotland and join forces with the MacDonalds. All aspects of this complex plan fell apart - the Irish element never materialised and the MacDonalds had second thoughts. The English army that mustered at the border town of Berwick-upon-Tweed only totalled some 15,000 men but it wasn't the official standing army of England, instead they were untrained conscripts, many armed only with bows and arrows. When they saw the professional Scottish army of 16,500 men under the experienced veteran Alexander Leslie, our man Thomas realised that any fight could only go one way, so the English backed off and threatened to refer the matter to the Scottish parliament! The only significant engagement of the war took place on 18 June, at the Battle of the Brig of Dee south of Aberdeen, between Royalist forces under Viscount Aboyne and Montrose. This can't be described a "Scottish victory", as both sides were actually Scottish, the Royalists being mainly citizens of Aberdeen. The Covenanters took Aberdeen and many of them proposed razing the city, which Montrose prevented. This defeat meant that the final aspect of Thomas Howard's plan, the landing of a fleet at Aberdeen, could not be accomplished either. The Second Bishops' War (1640) was basically a retaliatory and successful invasion of England by the Scots who demanded financial compensation for all the bother of the First Bishops War, which the English parliament was duly forced to pay - but our man Thomas was out of his armour by then, so of that I will not write. These disastrous wars with Scotland were one of the reasons that parliament broke with the King, creating the English Civil War. Our man Thomas though, being a man of the arts rather than of war, kept out of this Civil War (which he had helped create) and instead took up residence in Antwerp and then at a villa near Padua, in Italy. He died in Padua in 1646, having returned to the Roman Catholicism he nominally abandoned on joining the Privy Council, and was buried in Arundel. His main legacy was his huge Italian art collection, much of which still remains scattered around England.